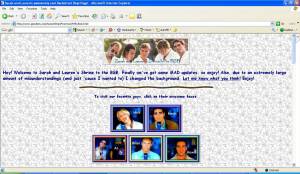 click to see that shit in all of it’s geocities.com glory

Yes, I used to have a Backstreet Boys Fan page.  I’m not proud of it.  It was 1998 and I was KTBSPA* like whoa.  The view counter is now defunct, but I think it retired at about 500 page views, 475 of which were me checking to see if I’d uploaded the HTML right, 24 were views I directly solicited from friends, and 1 was my friend Cory who logged in to sign the guest book as Howie D.

Note the title: “Sarah and Lauren’s awesomely cool Backstreet Boys Page!” (the exclamation mark really sells it).  While other teens were chronicling their angst on LiveJournal, I was up all night on ICQ, stealing pictures from other BSB websites, reposting interviews, and thumbing through my copy of ‘HTML for Dummies’.

The fact that I was 16 is no excuse.  That time in my life is a blur of TRL and sleep overs.  Also that one time I made a video of me fake marrying my AP History teacher, Mr. Tucker (who, unfortunately, was unable to attend the ceremony but my stuffed Little Foot was kind enough to stand in for him).

Thank goodness for my friend S, who took the BSB pins off of my purse and threw them in a puddle of Mt. Dew in the trash can during senior portraits, and then later took me to my first “barn party” where I consumed my first beer and attempted to impress him by smoking my first cigarette.  I’m not sure if he was impressed**, but the BSB curse was lifted and I moved on to the next phase in my life: a Ben Harper loving, Natty Light swilling, college freshman who hates her women’s college and escapes to Wake Forest to binge drink.

Thankfully I out grew that phase, too.

———————————————-
*Keeping The BackStreet Pride Alive.
**He left the party early, leaving me making out with my asshat of an ex boyfriend on the hood of ex-bf’s Camaro (barf), after which I passed out in the backseat of another friend’s car and woke up the next morning with my very first Hangover From Hell