Have you seen Disney-Pixar’s Up?  If you haven’t, do yourself a favor and watch it.  Do yourself another favor and keep a box of tissues nearby because this movie doesn’t just tug on the heartstrings, it goes all Indiana Jones on your ass and rips your still-beating heart out of your chest and shows it to you.  It’ll make you want to hug your grandpa.  Heck, it’ll make you want to hug everyone’s grandpa.

AnyoldmeneatingfrenchfriesatMcDonaldsalonemakemesad, the dogs in the movie have collars that vocalize their thoughts, and one of the dogs, the dumb but lovable* Dug, immediately bonds with Carl, the old man.  The affection is not mutual.  At one point Dug hides under Carl’s porch as the house floats away, and when Carl finds Dug on the porch, Dug offers this pitiful explanation: 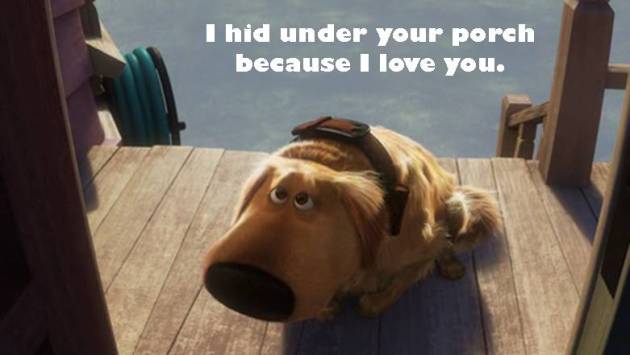 This phrase has been on my mind a lot because Dexter has been on a rampage.  He is getting over his second bladder infection in 6 months and in addition to the occasional (and understandable) lapses in bladder control, he’s taken to chewing holes in things around the house that are not dog toys.  I’m really trying to be as patient as possible with him, and so every time I come home to find a puddle of pee by the front door, I imagine him offering this semi-apology. 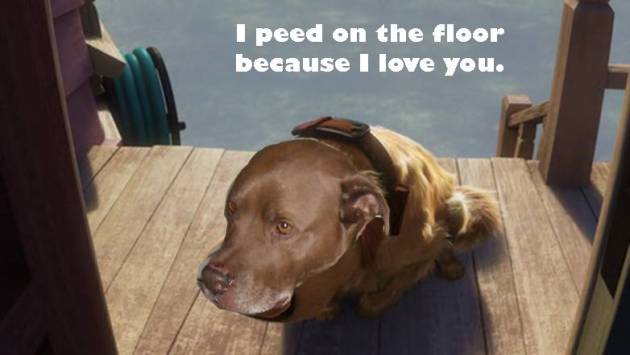 When I find a small rip in my new comforter: 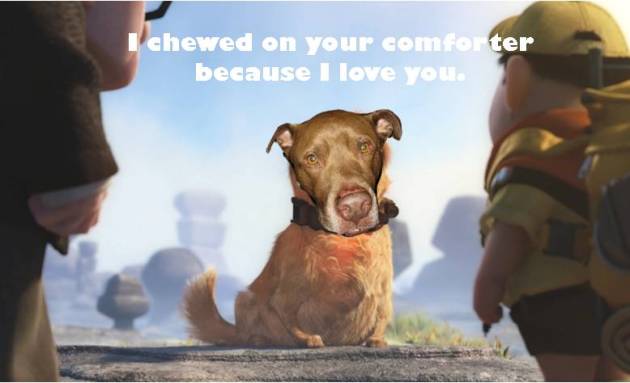 It helps with the rage.

And so, in an effort to turn my frown upside-down, I’ve entered Dexter in the Bissell MVP Pet Photo Contest.  If he wins, he’ll get his mug on a Bissell box and $10,000 will be given to a charity of my choice (BADRAP, “a small and busy non-profit organization of pit-bull owners, trainers, educators, rescuers and supporters” in the San Francisco area.  They take in dogs from dog busts all over the country, including the Vick dogs, and are fighting the good fight for pit bulls everywhere though education and training of people and dogs.), PLUS a Bissell vacuum or deep cleaner and a $500 shopping spree.

But friends – we need your help!  Please vote for Dexter!  You only have to vote once.  Judging by past weekly winners, he’ll need about 1000 votes to win.  If you’d help spread the word, I’d appreciate it.  The official Twitter hashtag is #dexterwantstobefamous.  Let’s start a trend.